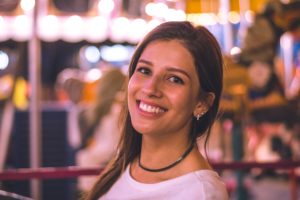 Here are a few things you should know if you’re trying to decide whether Invisalign Teen is right for your kids.

It’s Great, But It’s Not For Everyone

Let’s start by stating the obvious: we’re fans of Invisalign because we’ve seen the difference it’s made in so many of our patients’ lives. And there are many dental issues it can solve. But there are also some issues it’s simply not designed for. It can’t fix certain bite issues, and it’s not intended for teeth that need to be rotated or moved vertically. An examination will determine whether your teen’s a good candidate.

Sure, it’s right there in the name. But it’s true; unless you look closely, it’s hard to tell when someone’s wearing aligners. They’re much less noticeable than traditional, metal braces so teens will feel less conscious when photos are taken of them for big events like homecoming, prom, and senior pictures.

If you wore braces, you probably remember them coming with a long list of foods you couldn’t eat. Bagels, apples, popcorn, gummy bears, corn on the cob, and pizza crust were off limits. Other activities could get complicated, too, as you discovered if you tried to play trumpet or wanted to take karate lessons.

Invisalign Teen sidesteps those problems. There’s no brackets, so there’s nothing to break. Time to eat? Take the aligners out and enjoy whatever foods you’d like. It’s also easier to brush (there’s nothing for the food to get caught in), so there’s less tooth decay and less stinky breath.

Invisalign comes with two time-saving benefits. First, the aligners may work faster than traditional braces, so you’re spending less time undergoing treatment. Second, since each new adjustment to the alignment is done with a new set of trays, you’ll also spend much less time in the dentist’s chair. There’s one thing that Invisalign does share in common with braces, however: you’ll need to wear a retainer every night — and we do mean every night — once treatment’s done.

The straight teeth that come with Invisalign Teen are the main reason that many parents choose it for their kids. However, it’s worth noting that they’ll get more than just a pretty smile out of it. After the treatment’s done they’ll also gain a new sense of confidence in themselves that will lay the foundation for the rest of their lives.

Do you have questions or concerns about Invisalign for yourself or your teenager? Call Smile On Dental Salon and Sleep Apnea Center at 773-525-5545 or drop by our Chicago dental salon at 1350 W Belmont Ave. #1 to schedule a consultation!