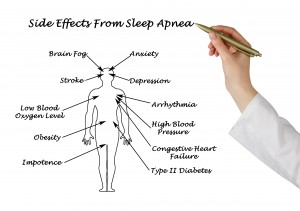 When it comes to snoring, it can cause both you and your partner a bad night’s sleep. However, if your snoring is due to obstructive sleep apnea (OSA), it can be an indication of a much bigger issue.

OSA can also increase your risk of other health problems, such as diabetes and high blood pressure, when left untreated. It can also make you a road hazard while driving. The good news is that sleep apnea is treatable and when treated, can help alleviate or even cure some of these health conditions. Below are some of the risks you face with obstructive sleep apnea.

You are at a higher risk of getting hypertension (high blood pressure) if you have sleep apnea, particularly while you’re sleeping. And, if you already have high blood pressure, OSA can worsen it. Your body becomes stressed when you wake frequently during the night causing your hormone systems to work extra hard — and this can lead to higher blood pressure levels.

OSA increases your risk of heart disease. In fact, a National Sleep Foundation study found that men who had severe cases of OSA were at greater risk of developing congestive heart failure than those who didn’t — up to 58 percent more likely.

There is also evidence that OSA can lead to angina pectoris (blocked blood vessels to heart that leads to chest pain) and future heart attacks, particularly in middle-aged men.
Another study which was published by the Journal of Clinical Sleep Medicine showed that you are also at an increased risk of stroke when you have sleep apnea and are four times more likely to have one than people without the condition.

People with Type 2 Diabetes often suffer with sleep apnea as well. In fact, it’s been shown that around 80 percent of people who have this form of diabetes also have OSA.

When you put on some extra weight, this can also increase your risk of sleep apnea. Your neck forms fatty deposits which can block your breathing during the night. Additionally, your body may release more of the ghrelin hormone when you have sleep apnea which causes you to crave more sweets and carbs.

There have even been several studies linking OSA with premature death. This risk is increased in middle-aged men who are more prone to getting cardiovascular disease.

OSA has also been shown to be linked to other health conditions like depression, headaches, daytime sleepiness and asthma. It’s even been shown to increase your risk of car accidents, according to a study.
The more research done on sleep apnea and OSA, the more it’s found that your symptoms of chronic sleep disruption could only be the beginning. Many experts believe it can have an effect on just about any medical condition.
But, again, the good news is that it is a very treatable condition and when addressed cannot just improve your alertness during the day, but also reduce your chances of developing any serious health issues in the future. If you believe you might have obstructive sleep apnea or have been diagnosed with it, give our Chicago, IL Dental Salon & Sleep Apnea Center a call at 773-570-1630 so we can help you.